The Enochian and Monad model.

The model of the universe used to explain a Enochian magic is called the  Enochian monad model. The monad is a single indivisible consciousness center above the first and highest Aether. When this Monad decisions into the ethers, it divides it self into two domestic parts: a subject of consciousness center, or self, and its objective environment, or world. The model produces the following 10 axioms:

First Enochian axiom: Humankind and every entity in existence is in essence a Monad. This monadic essence expresses itself as a subjective self and as an objective world

Third Enochian axiom: The self is conscious individuality.

Fourth Enochian axiom: The world is where the self find itself at any given point in time and space.

Fifth Enochian axiom: every geometric point is space in a monad at some stage of self-expression.

Six Enochian axiom: any self can communicate with any other self in so far as their worlds intersect.

Seventh Enochian axiom: a world is defined as a set of intersections of a host of worlds at any given point in time and space.

Eighth Enochian axiom: Subsets of self are mutually exclusive.

Ninth Enochian axiom: subsets of worlds may be either exclusive or inclusive.

Tenth Enochian axiom: the essence of each monad allows multiple tools expression but no self could ever separate itself from, or exist independently of, it’s world.

Although these axioms may at first appear confusing, a little study and thought we were reveal their simplicity. They expressed an old poetic and mystical definition of humankind as a circle, whose center is nowhere and whose circumference is everywhere. If we think of the center as monadic consciousness (the self) and the circumference as infinite Space (the world of self). 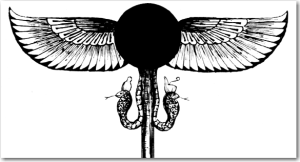 The Enochian Monad model expresses an ancient idea. The ancient Egyptians, for example, symbolize the self as a winged globe; the globe was a consciousness center who’s mobility was symbolized by a pair of wings. Egyptians considered centers to be masculine and circumferences to be feminine. The sleigh personified the world in the Goddess Nut (Nuit), Who is often shown arched over it. She represents the sky esoterically, and infinite space esoterically. The wind globe was a symbol for the god Horns. This symbolism is repeated throughout Western occultism and is included in the monad model of a Enochian Physics.